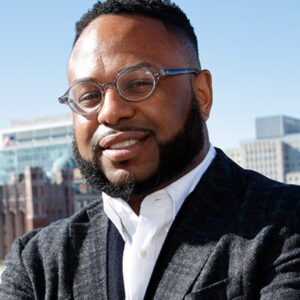 Biography: We increasingly interact with artificial intelligence (AI) and algorithms in our daily lives – when we go online, when we apply for credit, when we are screened by facial recognition technology. AI – while “intelligent” – often lacks the other qualities that would make it human, such as empathy and fairness. In another sense, AI can be all too human, drawing on flawed data to replicate human bias.

Dr. Desmond Upton Patton, Associate Dean for Innovation and Academic Affairs, founding director of the SAFE Lab and co-director of the Justice, Equity and Technology lab at Columbia School of Social Work, is a leading pioneer in the field of making AI empathetic, culturally sensitive and less biased. Through keynote presentations and interactive workshops, Patton is helping organizations develop a better approach to diversity and inclusion that includes fairer practices that address the challenge of prejudice, rather than contribute to it. Also the Associate Director of Diversity, Equity, and Inclusion and the co-chair of the Racial Equity Task Force at The Data Science Institute and founder of the SIM|ED tech incubator at Columbia University, Patton’s research uses virtual reality to educate youth and policymakers about the ways social media can be used against them and how race plays a part.

Professor Patton’s early work attempting to detect trauma and preempt violence on social media led to his current role as an expert on language analysis and bias in AI. As a social worker, Patton realized existing gold standard data science techniques could not accurately understand key cultural nuances in language amongst predominantly black and Hispanic youth. In response, he created the Contextual Analysis of Social Media (CASM) approach to center and privilege culture, context and inclusion in machine learning and computer vision analysis. CASM can be applied by businesses and other organizations to observe social media and workplace communication channels for potentially incendiary language, which taken out of context can lead to violence. With this methodology, organizations can better foster diverse and inclusive environments and minimize employee conflict. Further, Patton’s insights on creating non-biased and culturally nuanced algorithms give tech companies a holistic perspective on various business and social issues. The companies that adopt these proactive measures are then able to ensure they are not unintentionally propagating bias.

In 2018, Professor Patton published a groundbreaking finding in the prestigious Nature journal, Digital Medicine, which uncovered grief as a pathway to aggressive communication on Twitter. The report was cited in an amici curiae brief submitted to the United States Supreme Court in Elonis v. United States, which examined the interpretation of threats on social media. Widely referenced across disciplines, Patton’s research at the intersections of social media, AI, empathy and race has been mentioned in the New York Times, Nature, Washington Post, NPR, Vice News, ABC News and other prestigious media outlets more than seventy times in the last three years.

Professor Patton was recently named a Member of the Board of Directors at the Columbia Center for Technology Management and was appointed Faculty Associate at Berkman Klein Center for Internet & Society at Harvard University. He won the 2018 Deborah K. Padgett Early Career Achievement Award from the Society for Social Work Research (SSWR) for his work on social media, AI and well-being. He was named a 2017-2018 fellow at Harvard’s Berkman Klein Center for Internet and Society and is a 2019 Presidential Leadership Scholar and Technology and Human Rights Fellow at the Carr Center for Human Rights at Harvard Kennedy School.

Desmond Patton is available to advise your organization via virtual and in-person consulting meetings, interactive workshops and customized keynotes through the exclusive representation of Stern Speakers, a division of Stern Strategy Group®. 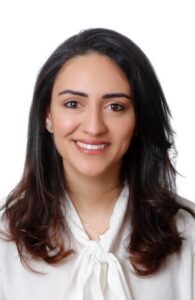 Talk title: How AI is Transforming the Technology Workplace

Abstract: Artificial Intelligence (AI) is being widely used to augment the workplace and improve employee experience. This talk will cover some of the innovations developed by the J.P. Morgan AI Research team that have been used to transform the workplace. These AI solutions were specifically created for the technology organization in order to reach the full potential of the approximately 50,000 software engineers from which it is comprised. The solutions draw from a number of patents and papers published by the team and range from topics covering toolsets, people, and processes.  Examples of these include determining the optimal toolsets for increased productivity, automatically managing tasks by planning developer sprints, extracting skills from candidate resumes’ for hiring, and even automatic maintenance of code repositories.

Biography: Salwa Alamir is a Senior Research Associate in the AI Research organization at J.P. Morgan. She is a technology leader with over 10 years of educational and industry experience in engineering, AI, and leading development teams. Her experience in creating technology solutions for financial businesses has led to her contribution on more than 7 patents.

Previously, Salwa worked in the Technology organization at J.P. Morgan. Her focus was using a data driven approach to streamlining software development lifecycle by implementing strategic tools, DevOps and SRE. Salwa has an MSc in Mechanical Engineering from University College London (UCL) and a dual degree BEng in Mechanical Engineering from UCL and Business Finance from the London School of Economics (LSE). She is currently completing a part-time PhD at UCL with a focus on Computer Vision. 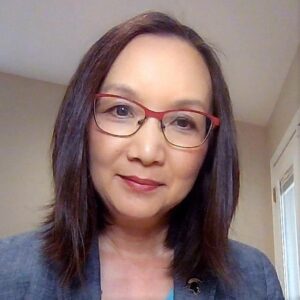 Throughout her career, and since originally joining MSU in 2019 as senior vice president for information technology and chief information officer, Melissa has proven herself as a skilledadministrator of large, complex units with a keen ability to refine cross organizational synergies. She is a strong collaborator with academic units to optimize institutional effectiveness and align administrative services with the university’s mission.

In 2019, Melissa won the inaugural EDUCAUSE DEI Leadership Award for her actions leading to improved diversity, equity, and inclusion in the higher education IT community. She also received the 2012 EDUCAUSE Rising Star Award, recognizing her as an emerging leader in higher education IT.

Throughout her career, she has been actively engaged with higher education professional organizations and is passionate in her support of aspiring leaders from diverse backgrounds. She currently serves as chair of the Merit Network board of directors, authors articles, and is a frequent conference presenter.